Holidays are a time to relax and unwind, luckily as a teacher, I have that holiday feeling a few times a year.  This half term Hubby and I decided to go and visit my family in New York.  We both wrote lists of things we wanted to do and see and I had more than a few gin related ideas!  Visiting a distillery being at the top of my list.

I did a bit of research and found a few distilleries which were operating in the NYC area, but only one really caught my eye Breuckelen Distilling.  I contacted them to ask about tours and received a lovely reply from Brad, who told me they weren’t really set up for them, but if I fancied popping in for a chat to find out a little more, then I was welcome to, eeeeep!  As it turns out Brad is the Master Distiller and he was incredibly accommodating with our rather lazy, hazy, holiday schedule.  So on Tuesday last week (13th February) Hubby and I walked across the Brooklyn Bridge, (in the freezing cold,) to work up a thirst before heading to Breuckelen Distilling, where I finally got to meet Brad…and warm up!  Brad was fab, so friendly, welcoming and keen to talk to us about what he quite obviously loves to do.  The first thing to note when walking through the door was the smell which is amazing, and I also immediately understood why he has said it’s not set up for tours.  77 19th Street is effectively a working warehouse, where every part of production takes place.  Filled with bags of grain, barrels, a forklift, two beautiful stills and much more, there isn’t physically enough room for tours.

The distillery takes it’s name from the original Dutch colonial name for Brooklyn.  When the distillery was established in 2010 there were no other distilleries in New York City, so where did the inspiration come from?  Brad used to work in finance, a job which just wasn’t for him.  He read an article in a magazine which said that laws related to distilling had changed making it the easiest time since prohibition to start a distillery, and after being made redundant the distillery seemed like a great idea. 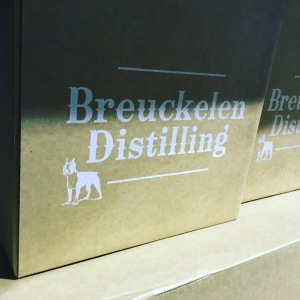 To make a good spirit, you have to drink good spirits, so Brad set about his research, (…sounds like a terrible job to me.) Sampling spirits to get a better understanding of how they worked, rather than just drinking them for pleasure.  Focusing now on the nuances, picking out individual flavours and understanding their dynamics.  He decided to start out with gin as the distillery’s first product because the legal definition for gin has more scope for flexibility.  The botanicals which were chosen for the gin were juniper, grapefruit, lemon, ginger, rosemary.  I’m not going to lie, the minute Brad said grapefruit my heart jumped…match made in heaven!  Each botanical is distilled individually so as to capture it at it’s best, then the five spirits are blended together to create the unique flavour of Glorious Gin…now that is some serious attention to detail.  It was definitely time for some tasting.

We started with the Glorious Gin, and my usual pattern of sniff, taste, double taste.  Not too strong or burning on the nose and there was a definite herbaceous feel to it.  Then to taste, OH MY DAYS, did this gin live up to it’s name.  It honestly was absolutely glorious!  Sweet, creamy and smooth, with herbaceous tones, a hint of grapefruit and a subtle edge of ginger.  I could easily just drink this gin neat.  It was when Hubby and I were trying to place the sweetness that Brad suggested we try the base spirit on it’s own.  Brad is a firm believer in local produce and uses a neutral wheat spirit, which he makes from scratch, using wheat which is grown in upstate New York.  I was a little dubious, Hubby, I’m pretty sure would have jumped into a vat of the stuff head first given the chance, there was no asking him twice.  Tentatively I sipped, expecting my head to be blown off, or my throat to be set on fire, but no, it was that same smooth sweetness from the gin, it really is utterly exceptional.

The bottle for Glorious Gin features a beautiful floral design on the front, and on the back the image of a black and white Boston Terrier.  Charlie the Boston Terrier was adopted by Brad around the same time as the distillery was being established and it therefore seemed fitting that Charlie featured in the distillery’s branding.  Sadly Charlie passed away last year, but his presence firmly remains on each and every bottle of gin and whiskey from the distillery.  He even sits on the top of Breuckelen Distilling’s new bottle stops.

Once we had tried the Glorious Gin, and the neutral spirit, it was time to sample the Glorious Gin: Oaked, which is created by resting the Glorious Gin in oak barrels.  This gin is divine, picking up notes of vanilla, baking spices, and a warmth from its time spent in oak.  Now, as I briefly mentioned earlier, Breuckelen Distilling not only produce gin, but they also produce whiskey.  I must admit, I am about as far from being a whiskey fan as you could possibly imagine, Hubby on the other hand loves the stuff and was keen to sample Brad’s different varieties of 77 Whiskey.

I’m pretty sure my face said it all, this was not going to end well, but I couldn’t very well be rude to Brad and turn my nose up or even hold my nose as I tipped it down the hatch.  I tried one…two…three…four different kinds of whiskey and quite honestly didn’t dislike one of them!  I’m not saying I could sit and drink them all night the way Hubby does, but as they are all created using that same neutral wheat spirit which is used in the gin, they all had that similar gorgeous smooth, sweet undertone.  Mind Blown!  I’m sure given half a chance we would have stayed and talked for ages, but luckily for Brad we had an ice hockey game to get to, allowing him to lock up and head off.

Now the question you obviously want answering is, can we get this Glorious Gin in the UK?  I’ve been investigating and it would seem that on Master of Malt 3cl samples are available to buy, although the large bottles have sold out.  Perhaps if we boost these sample sales they will get some more of the big bottles in?  After a bit more searching I found that several bottles are still available from Beers of Europe, so if you fancy getting your hands on some, which you most definitely should, I’d do it quick before they all sell out!

Well, what an absolutely wonderful time we had, a HUGE thank you to Brad for being so friendly, welcoming and accommodating and for introducing me to whiskey which I actually find palatable!  Your gin is amazing and I am so, so pleased that I had the opportunity meet you and try some.  You most definitely have found your calling…thank goodness for us you didn’t stick with finance!

One thought on “Breuckelen Distilling and their Glorious Gin”