A wee while ago I was contacted by Bancon Homes to ask if I would like to try their gin…I must confess, I was rather confused at first.  A quick google and I found lots of information about houses but nothing about gin.  Curiosity levels piqued, (and because no one in their right mind should ever turn down gin,) I replied with a very definite “Yes please.”  So, to find out a little bit more.

After sponsoring the gin tent at Banchory Beer Festival last year, Bancon Homes felt inspired and decided to branch out with their very own limited edition bespoke gin.  (I would be interested to find out how much of the inspiration was fuelled by our favourite tipple.)  Their idea being that a bottle will be given as a moving in gift to buyers who move into a Bancon Homes property, rather than the usual hamper…a nice bonus for us gin drinkers.

They teamed up with Simon Fairclough to develop an exclusive gin recipe.  Simon Fairclough is a name which may already be familiar to you as he is the managing director of Glenshee Craft Distillers in Perthshire, who produce Persie Gin. 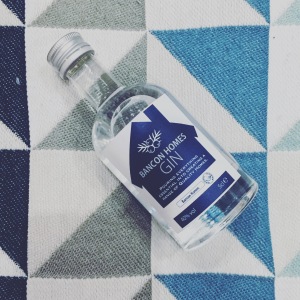 It was all sounding very promising that something rather delicious was en route and I was very excited when my bottle arrived. The Bancon Gin is created using the London Dry process.  This does not mean that it has to be made in London, what this basically means is that the gin has to adhere to a set of rules, the biggie being that it can’t have any colouring or flavouring added after the distillation process.  In the case of The Bancon Gin, the only thing added after the distillation process is water from Persie Distillery’s private supply of natural water from the local hills.

Hubby, was a little more dubious than me about The Bancon Gin, and quite sceptical about whether it would actually be any good.  The gin arrived complete with it’s own little information booklet, outlining the concept, the botanicals and also some serving suggestions and after reading through, I was fairly convinced he would be won over.  Only one way to be sure though…tasting time! 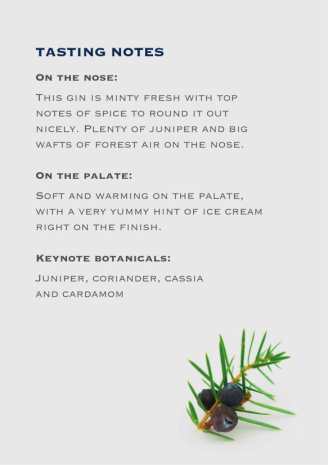 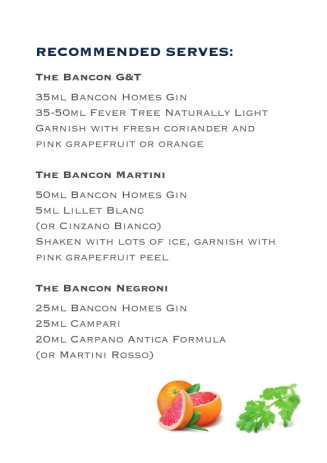 I was really impressed with The Bancon Gin, very smooth with a gentle warming spice, as it says in the tasting notes.  I do worry when I do the tasting bit, just in case I don’t taste what I’m supposed to, but we’re all different, so surely we’re all going to taste things a little differently.  I didn’t so much get the minty freshness with a hint of ice cream, but instead felt that real citrus notes came through on the palate.  It made a really delicious G&T and I went for an orange garnish rather than the pink grapefruit, which is very unusual for me, but I felt the orange would be great with the citrus flavour I’d tasted.  I also made The Bancon Negroni, which I really enjoyed.  As I’ve said before, I always found a Negroni to be a little too pokey, whereas Hubby loves them, but interestingly, when it came to finishing off the drinks I chose the Negroni and he went for the G&T. 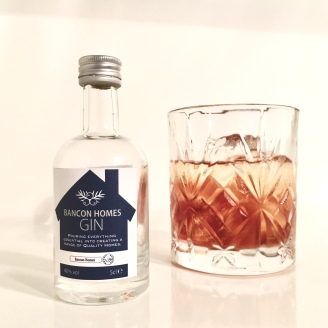 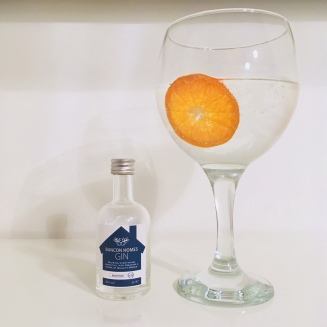 With only 300 50cl bottles being produced, how do you get your hands on a bottle?  Do you actually have to buy a house?!  Well thankfully the answer is no.  There is currently a competitions running where entrants can win the very first bottle of The Bancon Gin, which will be labelled with that sought after number 1 and personally signed by Simon Fairclough.  Now, in my opinion, that’d be a pretty awesome bottle to add to the collection!  To enter the competition, just click on the link and head over to Win The Gin on the Bancon Homes website.  Get there quick though, the competition closes on 31st March. Perhaps if there is enough interest they can be persuaded to make some more, I would certainly buy a bottle of the stuff!!

This was me at 9:30am. Morning gin seemed the only sensible thing to do on the first Saturday of the apocalypse...I've so far had 3 @xoriguergin mixed with bitter lemon and I'm feeling decidedly better about everything. Now I think it's time to download Disney plus and eat junk food! What are you guys doing with your apocalyptic Saturdays? P. S - I didn't suggest the morning gin, it was entirely the fault of @jc_hit_or_miss_me and @insta_mike_f who fancied some morning Skype funtimes . . . . . . . . . . . #gin #tonic #gintonic #gincocktails #ginoclock #ginstagram #ginlovers #ginandtonic #cocktail #ginaddict #ilovegin #instadrink #itsginoclock #gandt  #ginobsession #ginblogger #love #instagood #photooftheday #ginobsessed #friends #blogger #morninggin #picoftheday #happy #bitterlemon #mixology #selfisolation #disneyplus #theapocalypse
**COMPETITION CLOSES MIDNIGHT** Fancy winning some gin to help keep you sane while the world is going mad? Entering is simple 1. Like this post 2. Follow @foxholespirits 3. Follow @ginobsessions 4. Comment below tagging the person you're going to share your HYKE with once all this crazy goes away...unless you drink it all yourself to get you through the madness! I've teamed up with one of my absolute favourite gins to celebrate their first birthday 🎉 HYKE GIN from Foxhole Spirits is created using grape spirit produced from internationally sourced, fresh table grapes that are surplus to the requirements of the supermarket supply chain. Made in England, HYKE is flavoured with a blend of botanicals inspired by the grapes’ African and South American origins, including coriander, myrrh and rooibos. It is arguably one of the smoothest gins I think I've ever tried and scarily quaffable...I guarantee the bottle won't last you long and you'll be straight out to buy another! Competition will close on at midnight on Friday 27th March. Winner will be announced after this time. This prize is not affiliated with Instagram in any way. You must be over 18 to enter. Competition open to UK only . . . . . . . . . . . . #gin #tonic #gintonic #gincocktails #ginoclock #ginstagram #ginlovers #ginandtonic #cocktail #ginaddict #ilovegin #instadrink #itsginoclock #gandt  #ginobsession #ginblogger #love #instagood #competition #ginobsessed #friends #blogger #fun #picoftheday #happy #gincompetition #freegin #wingin #foxholespirits #HYKEgin