I’m very fortunate in the respect that over the past few weeks I’ve been invited to and attended some pretty fabulous gin events.  Even more interestingly, they all seem to have had one thing in common, see if you can guess the connection.

A multi-sensory approach to the enjoyment of your drinks!

**WARNING, this one is a pretty long read as I get geeky and a little over excited about it all!!**

In all seriousness though, it really is a fascinating, yet simple, concept.  Sights, smells, flavours and textures can so easily transport us to a certain place in time.  Why is it, that when you buy fish and chips on the coast they always taste better enjoyed on the seafront than further inland or even at home?  The smell of a perfume which conjures up the image of a familiar face and then confuses the life out of you when it’s not the person you’re expecting. That taste you get in your mouth when you’re not actually eating but makes you think, ooo, I’m really in the mood for…whatever it is.  I grew up in Loughborough, Leicestershire, which hosts an annual street fair each November that can be dated back almost 800 years! It’s a huge event in the town and in the run up to the event we would wait for that change in smell which hinted it was almost time.  Something changed, the first frost, a clean crispness which told you it was nearly winter and therefor almost Fair Time!

Anyway, reminiscing over, you get the idea.

The concept of the evening was for guests to enjoy Silent Pool Gin cocktails whilst sensory expert Professor Barry Smith, showcased a series of experiences designed to demonstrate how flavour can be altered by different sensory environments. The experiences were to include tasting cocktails alongside soundscapes to show what sounds enhance what flavours and how your environment can alter what you want to drink.

As the event was to be held at Cambridge Audio, and Hubby works for Focusrite I asked him if he fancied coming along too.  The guys at Cambridge Audio have a seriously cool office space, with the working area located upstairs and a great event space downstairs, featuring a wall covered in what can only be described as giant dangly sequins, another entirely covered in records and a bar shrouded in a canopy of Silent Pool Gin bottles, 224 to be precise. (I did some quick maths to be sure!) 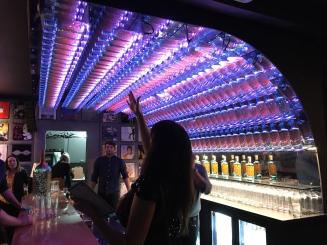 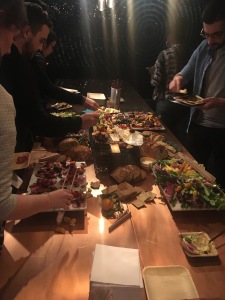 We were given our welcome cards, shown where the nibbles were and directed to the bar to grab a refreshing G&T.  We were also advised that we had been booked into the 6:45 sensory experience session, which was being run by Barry.  Professor Barry C Smith is a British philosopher and Director of the Institute of Philosophy at the Institute of Advanced Studies at University of London.  He is also co-director and founder of the Centre for the Study of the Senses. Working mainly in the philosophies of mind, language and psychology where he works on self-knowledge, knowledge of language, the nature of taste and the multi-sensory perception of flavour.  In short, he comes with a pretty extensive wealth of knowledge and experience.

While waiting for our session Hubby and I managed to have a bit of a chat with Barry, who was absolutely lovely and explained that he had already carried out these types of sensory experiments using whisky and champagne.  He hadn’t worked with gin before so was really keen to be involved in the project, despite having more of a preference for wine than our favourite tipple.  We were soon ushered into a soundproof room, with fresh glasses of G&T and invited to grab a seat…although me being me, I grabbed a quick pic with Barry first!  The space seated around 20 people, which was the perfect amount to allow for discussion after each drink. Hang on, let me backtrack as I’ve jumped a little ahead of myself.

After explaining a little about himself, Barry described this experience as being an investigation into sound, touch and tingles, then cracked straight on with “ginvestigation” number one, which was the first of three.

Barry went on to explain how there is a direct link between what we feel and what we taste, the idea being that our hands almost predict what our mouth is going to experience.  If we were to pick up something hard to eat, we expect the texture to be hard in our mouth, similarly if we pick up something soft, we expect it to be soft.  Our brain is so used to making these connections, that it makes these predictions for us before we even try something.  I’m pretty sure this is why I don’t like tomatoes…they have far too many textures for me to get my head around!  Therefore by stroking the velcro, we were effectively tricking our brain and confusing it.  For those of you who are interested, there was a chap called Filippo Tommaso Marinetti who, in 1932, had a book published called “The Futurist Cookbook.”  Part manifesto, part artistic joke, it outlines the eleven requirements for the ideal Futurist meal, the idea being that all aspects of a meal are important.  The cutlery, the china, the crystal, the decor, the colours, even down to the idea that “every dish must be preceded by a perfume which will be driven from the table with the help of electric fans” to enhance the taste.  It sounds nutty as anything, but honestly, give it a go at home and see what happens.  I mean with the velcro and satin, not with the perfume and fans…although you could if you wanted to.

3. For the third experience, Silent Pool Gin had been combined with Szechwan pepper and applied to the end of a cue tip.  We were asked to apply this to our tongue or to the inside of our lips and then to listen to a sound whilst watching the sound-wave.  The image of the sound-wave perfectly matched the buzzing feel of the Szechwan pepper on my tongue.  The dull tingling feeling matched the slow low sound-waves, which developed into a more prickly, pins and needles feeling that was represented by the greater peaks and troughs of the sound pattern. 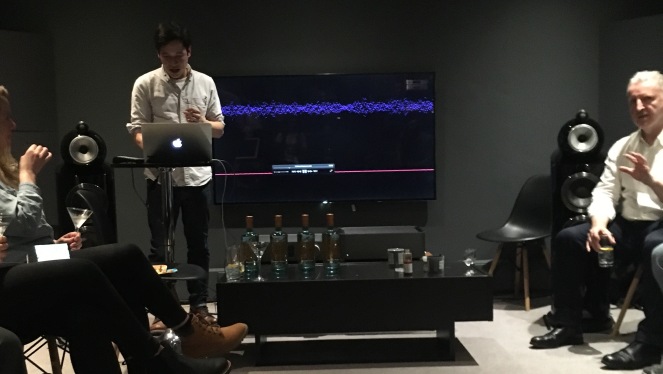 I must say I really, really did find this fascinating.  I completely appreciate that it’s not everyone’s cup of tea, but it most definitely captured my attention, AND it was right at the start of the night, so it’s not even that I enjoyed it because I was a little bit squiffy!

After this final experience we re-joined everyone else in the main room where we were the bar was still serving very large Silent Pool G&Ts.  A little later Barry discussed the common phrase…”Ooo, I’m really in the mood for…” and how usually it is the surrounding which creates that feeling.  So, theoretically it should work the other way around, meaning that (heaven forbid) we’re not the mood for a G&T, there should be some way of crafting our environment to set that mood, by recreating a setting or scenario.  This could be done through lighting, music, surroundings, anything really which plays to the other of our senses.  He tried to demonstrate the point by playing three different background noises and encouraging us to drink during each.  The first sounded like a cold windy day, the second a rainstorm (it sounded to me more like an audience in a round of applause,) and finally the sounds of a summers evening (crickets chirruping and such.)  I must say, the final sounds really did transport me to long evenings spent out on the balcony or round a pool on holiday, making me smile while I sipped my drink.  Interestingly, Hubby preferred the cold windy day sounds.  For him, he said it was reminiscent of cosy weekends in the pub or snuggled up at home. 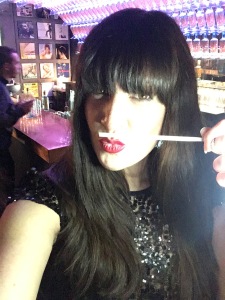 We did another couple of sessions in the main event space, the first involved listening to sounds whilst smelling fragrance cards which had been steeped in the individual Silent Pool botanicals.  The second involved the “Festive Negroni” where we were presented with two Negronis, one red and one green (yes…green!) We had to drink each whilst listening to a different Christmas song and decide which we felt embodied the Christmas spirit best.  There were great mumbling and murmurings of which was the nicest and amusingly they were in fact both the same.  Simply white negronis (30ml Silent Pool, 30ml Suze, 30ml Lillet blanc,) with tasteless, odourless food colouring added for effect.

At this point the evening was really winding down, it was most definitely time to go home and better still, it wasn’t even close to pumpkin o’clock!  Which meant I felt super duper spritely and fantastic the next morning!

I honestly absolutely loved this event and found it to be a hugely interesting and fascinating subject.  Thank you so much to Silent Pool Gin, Cambridge Audio and of course Professor Barry Smith for such a wonderful evening.  I most definitely have some ginvestigations to carry out following this one…

It's my Fri-YAY!
Happy Mother's Day folks, didn't think I'd be having to defend my gin quite so soon 🤦🏻‍♀️