“Hey lovely, one of the co-founders of Cape Byron Distillery is going to be in town later this month. He wants to do a tasting with some lovely gin peeps. I’ve got an area sorted at the Oliver Conquest at 7pm on Thursday 26 July. Can you make it?”

I didn’t know anything of the distillery, but the tasting was being held in the first week of my summer holidays…what better way to celebrate the beginning of my six weeks of freedom?  Yes, yes, a million times yes, of course I can make it.

Along with the invite I was sent a video link, which posed as an introduction to the distillery.  Now, you all know how I love a good story, well this certainly seemed to have the makings of one and I was most definitely interested to find out a little more.

I was greeted by some familiar faces at The Oliver Conquest, introduced to Eddie Brook, one of the co-founders of Cape Byron Distillery and handed a large Brookie’s G&T (more on that in a bit).  Once our (soon to be very) merry bunch had all assembled, we settled in for what has to be one of the most enjoyable, casual, witty and interesting gin tastings I’ve been to. 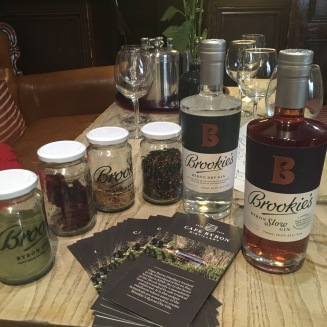 Eddie is incredibly charismatic and it is clear from how he speaks that he is utterly passionate about what he does.  He opened the evening with the very amusing story of how his parents, Pam & Martin Brook, came to buy a rundown dairy farm in the hinterland of Byron Bay 30 years ago.  He went on to explain how 160 years ago the rainforest used to stretch from Lismore in the south, through Byron Bay and up towards the Nightcap Ranges, across 75,000 hectares, while today less than 1% of that rainforest remains.  When his parents bought the farm back in 1988, it looked as shown below.  Desolate land serving no purpose. Since buying the farm the family have planted over 35,000 subtropical rainforest trees, completely transforming the area and creating a thriving ecosystem which is teaming with life.  A proportion of the profits from Brookie’s Gin feeds into the Big Scrub Landcare Foundation, which Martin Brook is Vice President of. 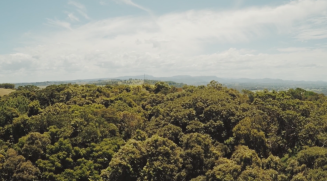 Eddie then captivated us all, explaining how the gin actually came about.  When working with SouthTrade he was tasked with organising a whisky tour around Australia with Jim McEwan, three time Master Distiller of the year, and Eddie’s idol!  Eddie went full fanboy when talking about Jim, proudly and unashamedly gushing about his hero.  Putting it into context, Eddie said, “If I could of had posters of Jim McEwan on my wall, I would have!”  He talked about how nervous he was to first meet Jim and how they had gotten to know each other during the tour.  Eddie said they had shared a connection from the beginning, based on similar values and beliefs.  He shared the story of his family farm with Jim who turned to him and said “we were meant to meet and start this distillery.”

In no time at all Jim visited the rainforest and likened it to a spiritual retreat.  He was able to taste the fruits and wild plants which Eddie had spoken about and was left thinking about how he could use these to make gin.  Brookie’s is created with 26 botanicals, 18 of which are indigenous to the Northern Rivers (Byron Bay) including Byron Sunrise finger limes, Aniseed myrtle, cinnamon myrtle, macadamia, native ginger and native raspberry and their pure spring water comes from Mount Warning.

There are three points of distillation involved in the creation of Brookie’s, the second point being something called the Babylon Bag, which was devised by Jim and takes its name from the Hanging Gardens of Babylon.  These muslin bags are filled with botanicals and hung inside the pot still above the alcohol.  The idea being that these particular flavours vaporise in the bag and then pass over as top notes when the gin is tasted…did someone say tasting?

No tasting yet, because first we had to feel the gin…what?!  Yup, pop a drop on your finger, check the surface tension of the droplet by effectively trying to shake it off, then gently rub it into the back of your hand.  Sounds totally random but I’ve become a little obsessed with this routine now when tasting gin, never fails to make me smile.

Jars of botanicals were passed around, and finally a bottle of Brookie’s Byron Dry Gin made its way round too.  My oh my was it delicious and worth the wait.  An incredibly balanced gin which takes you on a journey through so many flavours, just as intended.  A combination of citrus and juniper, herb and pepper, all with a creamy texture.  In the absence of finger lime as a garnish, pink grapefruit was used as an alternative.  Pink grapefruit?!  Now they really had me.

But there was more.

Whilst merrily quaffing our G&Ts, Eddie passed around the Brookie’s Bryon Slow Gin, made in the traditional English sloe gin style, but using Davidson’s plums which are steeped in Brookie’s Dry gin for over six months.  Wowee, if you guys are looking for something to warm your cockles in the upcoming winter months, then this is the tipple for you.  By far one of the most delicious sloe gins I have tried.  The plums are also pretty insane and ridiculously sour…imagine Haribo Tangfastics but better.  There was also much hilarity as we discovered each others #plumface when sampling the dried Davidson’s plums.

Being such great gins, it’s not hard to imagine that the bottles of Brookie’s Dry and Brookie’s Slow were demolished fairly quickly, and we were all left wanting more.  Thankfully there was plenty of time for silliness and photos, although even that had to come to an end due to an imminent last train home situation.

It was only then that the terrible realisation dawned on me, Brookie’s wasn’t yet available to buy in the UK, next best thing? I claimed one of the empty bottles for my collection…well if nothing else at least I could sniff it and imagine the flavour.

At the end of last week I received some amazing news, Brookie’s Byron Dry Gin is finally available to buy in the UK and you can order it online from Amazon or The Whisky Exchange.  Although my post this week was a little better than even that news.  No points for guessing what it was…

Happy Mother's Day folks, didn't think I'd be having to defend my gin quite so soon 🤦🏻‍♀️
**GIFTED**